A French territory almost 17,000 from mainland France, New Caledonia is a string of islands and islets in the middle of the Pacific Ocean and Coral Sea. Its world-famous coral reefs and lagoons, listed as UNESCO World Heritage Sites, are among the biggest on the planet and immerses visitors in idyllic landscapes. Turquoise waters, stunning seabeds, wild vegetation and Kanak culture all contribute to the authenticity of this destination ideal for holidays in the sun.

All about cruises New Caledonia

Revealing the Mysteries of Melanesia - with National Geographic

Revealing the Mysteries of Melanesia

From New Caledonia to Micronesia

Price is per person, based on double occupancy, based on availability, and subject to change at any time. The category of stateroom to which this price applies may no longer be available.

There is no better feeling than a sense of total freedom in an idyllic landscape. New Caledonia offers just this, as well as a culture with multiple influences. Below is a little guide for travellers going to this dream destination. 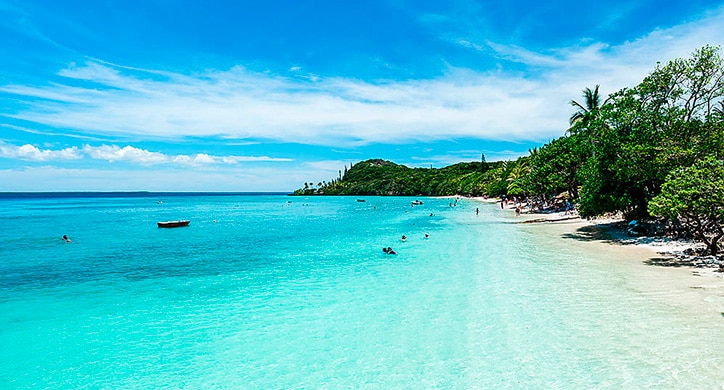 There is no better feeling than a sense of total freedom in an idyllic landscape. New Caledonia offers just this, as well as a culture with multiple influences. Below is a little guide for travellers going to this dream destination.

Dos. People in New Caledonia tend to use informal language without this indicating a lack of respect. It is also important to take your time and do things slowly.

Don'ts. You must respect Kanak culture and customs.

Visit the Aquarium des Lagons in Nouméa to see the oldest coral in the world living in a pool. This echinopora, also known as hedgehog coral, is 53 years old. Its behaviour and ability to adapt are being carefully studied. In November, the public can see the coral spawning. This only happens once a year and lasts for just a few hours.

All New Caledonians speak fluent French and no fewer than 28 languages and 11 dialects are also spoken, including Kanak tongues. Four or them are officially recognised as regional languages and taught at secondary school and university. There is the Drehu language on Lifou, Nengone on Maré, Paicî in the Poindimié and Koné-Pouembout areas of Grande Terre and Ajië in the Houailou region.

A traditional Melanesian dish from New Caledonia, bougna is made with chicken or fish, sweet potato, cassava, ripe bananas, yams, tomatoes, onions, celery and parsley and simmered in a pot with coconut milk. The dish can also be cooked by wrapping the ingredients in banana leaves and cooking them over a wood fire on hot stones.

The legend of Bugni and Ku tells of the origins of these two iconic New Caledonian trees. The first is solid and used as pillars in hut-building. The second is only used in fires for cooking pots. Legend has it that a poor and lonely woman prayed to the Sun, asking for comfort and children as being childless was making her miserable. In response, the Sun gave her two trees, which she indulged as if they were her own children. Once they were fully grown, she asked them for a little wood so she could warm herself. To the first, which happily accepted, she predicted: "You will be a strong tree and men will struggle to cut you down as you will only yield late in the day. But they will be able to count on you for building their huts." To the second tree, who refused her, she said: "When men want to cut you down, you will fall straight away and rot quickly, heart-first. You will be no more than firewood, burn quickly and never warm anybody up!".

Books. The first novel from documentary maker Jacques-Olivier Trompas, Au pays des Borgnes (2018), tells the story of former war photographer Franck Archemont. When his father dies, he returns to New Caledonia to be with his mother and their fields, as well as the complexity of this land he has seen grow. Franck, then his daughter, Sarah, try to lift the veil on a multiracial Oceanian society that may finally be able to overcome the violence of the past to build a better future.
Déwé Gorodey's literary work includes a variety of plays, poems, essay tales and novels showcasing Kanak culture and the writer and separatist politician's engagement.

Music. Although many New Caledonian dialects are endangered, music sometimes keeps them alive. Several local groups have decided to sing in their Kanak language to save this piece of cultural heritage.

Film. In Nouvelle-Calédonie, un caillou pas comme les autres, (New Caledonia: a rock unlike the others), the documentary maker Bernard Crouzet shows the cultural diversity of this island where Kanaks, Caldoches (European descendants), Métis (people of mixed race), Polynesians and Asians live together in idyllic settings.

With a surface area of 24,000 km2, the New Caledonian Lagoon is one of the world's largest. It is bordered by a 1600 kilometre-long barrier of coral reef: the second biggest on the planet.