Athens, Patmos, Katakolo, Mykonos, Santorini... all dream destinations for travellers in search of adventure and relaxation. A cruise to Greece and the Cyclades is the perfect chance to soak up the Mediterranean sunshine and ambiance, from the pine forests, beaches with turquoise waters and villages of whitewashed houses to iconic sites such as the Corinth Canal.

All about cruises Greece & Greek Islands

Highlights - Greece and the Cyclades

A cruise to Greece and the Cyclades will take you on a journey to the very heart of the Mediterranean. This area is home to some of the most important landmarks and ruins of Greek civilisation, as well as some legendary islands. From Mykonos to Santorini, the relaxed lifestyle and beautiful landscapes offer the perfect setting to get away from it all. 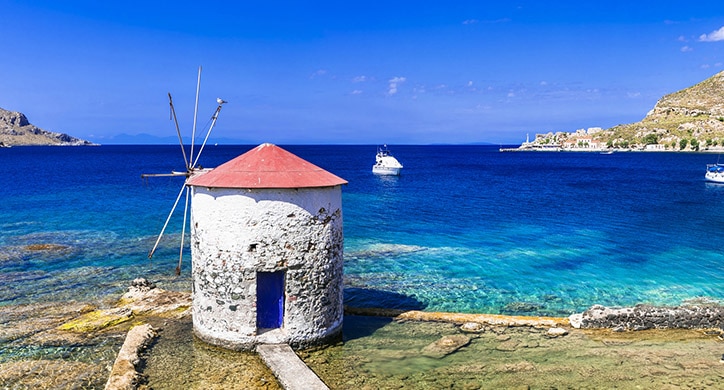 Essential - Greece and the Cyclades

The stunning landscapes of Greece and the Cyclades are punctuated with ancient monuments dating back thousands of years. Travellers can step into a living fresco, in which history and culture mingle with the perfumes and flavours of the Mediterranean. We have put together a quick overview. 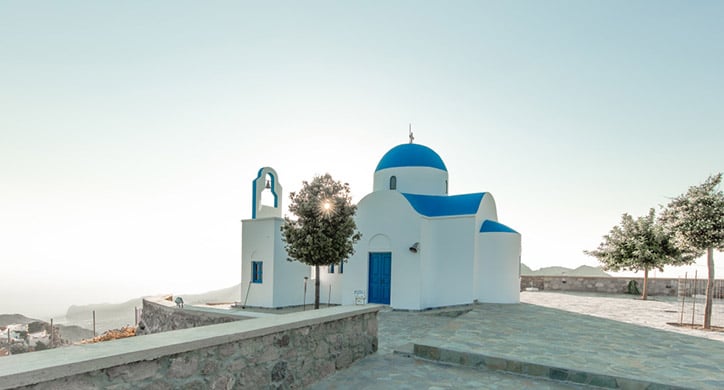 Highlights - Greece and the Cyclades

A cruise to Greece and the Cyclades will take you on a journey to the very heart of the Mediterranean. This area is home to some of the most important landmarks and ruins of Greek civilisation, as well as some legendary islands. From Mykonos to Santorini, the relaxed lifestyle and beautiful landscapes offer the perfect setting to get away from it all. 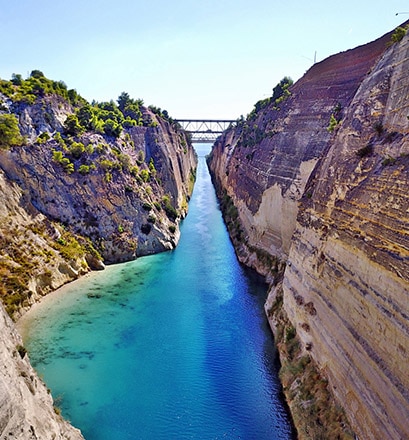 Sail through the Corinth Canal

A passage between the Ionian Sea and the Aegean Sea, the Corinth Canal is an essential part of any Greek cruise. Separating the Peloponnese from the continent, it offers a unique sailing experience. Measuring just 24.60 metres in width, sailors navigating this 6-kilometre canal must be extremely vigilant. 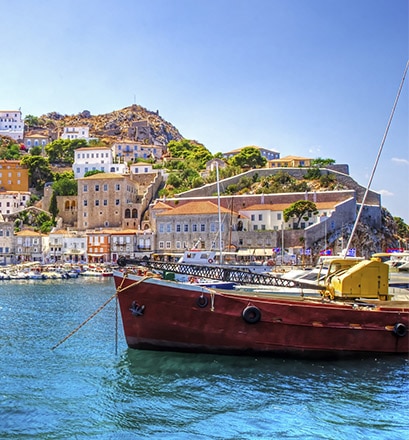 Take a stroll on Hydra

To the south of the Peloponnese, the island of Hydra is best explored by boat, on foot or with a donkey.Cars are banned from the island, which was known for its powerful fleet until the 1820s. Today, pleasure boats have replaced the commercial vessels, letting passengers admire the island's rocky, maquis-covered Mediterranean coastline. The charming town of Hydra is easy to visit on foot, from the white houses covered with bougainvillea and jasmine to the churches and historic mansions built by powerful shipowners. A 15-minute walk away, travellers can also drop into the authentic Greek fishing village of Kamini. 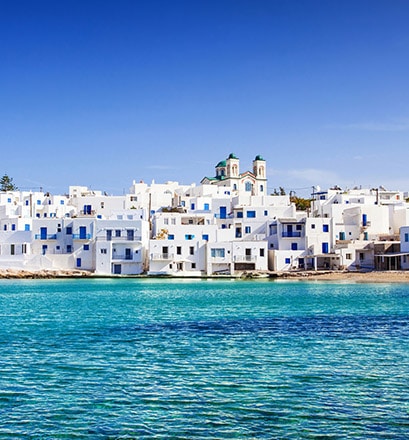 Appreciate a more relaxed way of life in Paros

The pearl of the Cyclades, Paros is a Greek postcard come to life. Its small fishing ports are filled with blue and white boats to match the whitewashed houses with navy shutters, while the beaches are hidden in coves or laid out along the coast in long stretches of golden sand. High in the hills, Lefkes is one of the island's most charming villages. Its cobbled streets are lined with taverns, offering breathtaking views of the surrounding hills, the sea and the distant island of Naxos. 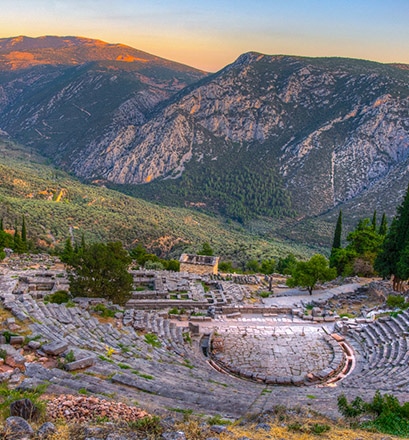 Wander the sacred ruins of Delphi

At the sacred site of Delphi, the gods of old still have a powerful presence. In a magnificent location at the foot of Mount Parnassus, it provides a stunning panorama of the surrounding hills. From the 4th to the 6th century BC, Delphi symbolised of the unity of the Greek world. This important position is reflected by the Sacred Way that connects the temple of Apollo, the council house and the spectacular theatre. 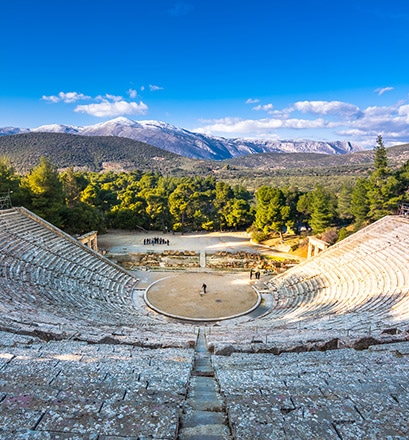 Test the acoustics of the Theatre of Epidaurus

The Theatre of Epidaurus is known around the world for its exceptional acoustics and its perfectly preserved structure. Even the slightest sound in the orchestra carries to the very top of the auditorium, allowing all 12,000 spectators to appreciate every performance. Dedicated to Asclepius, the god of medicine, this ancient theatre hosts an annual festival every summer. 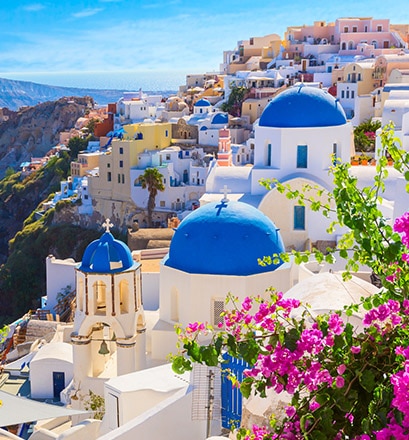 Discover the beauty of Santorini

Blue-roofed churches, whitewashed villas, stunning views and the most beautiful sunsets in the Mediterranean: Santorini is the best-known archipelago in Greece, and for good reason. It is the ideal setting to enjoy a magical moment and embrace the understated refinement of the Greek way of life.

Essential - Greece and the Cyclades

The stunning landscapes of Greece and the Cyclades are punctuated with ancient monuments dating back thousands of years. Travellers can step into a living fresco, in which history and culture mingle with the perfumes and flavours of the Mediterranean. We have put together a quick overview.

Dos. In Greece, people tend to use informal language all the time and with everyone, including the elderly. You should not expect to be greeted in formal terms.

Don'ts. Mountza is a very insulting gesture in Greece, made by extending your hand with your palm facing out and your fingers spread. It signifies that you are cursing someone and their entire family for 5 generations, and is not to be taken lightly!

Typical Greek dishes include gyros, tzatziki, a variety of salads, feta and, of course, moussaka. But did you know that this aubergine and ground meat gratin is just one of a group of dishes known as mayirefta ? This term refers to a range of traditional recipes that are cooked in the oven or simmered in a pot for several hours. In addition to moussaka, you may encounter yemista (vegetables stuffed with rice and many condiments), lemonato (meat simmered with lemon and oregano) and stifado (a meat stew with tomatoes and onions).

The Champs-Elysées is not just a street in Paris! Their namesake, the Elysian Fields, is an ancient concept from Greek and Roman mythology, representing an area of the afterlife reserved for heroes and good people.

In May 2018, Healthy Seas lifted two tonnes of abandoned non-biodegradable plastic fishing nets from the seabed off the coast of Stratoni, Greece. This NGO travels the North Sea, the Mediterranean and the Adriatic to remove these "ghost nets" from the water. They have successfully protected underwater biodiversity by collecting 453 tonnes of this material since 2013, which Healthy Seas plans to turn into fabric that can be used to create sportswear, swimsuits and rugs.

Book. The Island , Victoria Hislop (2013). This novel plunges the reader into a tangled web of taboos and family secrets. It follows a young English woman, Alexis, who decides to spend a summer in Plaka, Crete, where her mother was born and lived until she was 18 years old. This homecoming soon unravels into a mystery as she begins to ask some big questions: Why did her mother run away from her past? What secrets lie on the island of Spinalonga, which was a leper colony for the first half of the 20th century?

Music. Nisiotika (which means island in Greek) is the traditional music of the Greek Islands. In the Cyclades, this style is closely tied to the Cretan tradition, combining poetic couplets with lyra or violin melodies for a more western sound. On the other islands, local dances, with Turkish or Italian influences, accompany mandolin or guitar music. Some of this genre's most famous performers include Mariza Koch and Mythos.

Film. Based on Nikos Kazantzakis' 1946 novel Life and Times of Alexis Zorbas, Zorba the Greek (1964) is a cult film that has shaped the public perception of Greece. Filmed entirely in Crete, it won three Oscars in 1965. It follows Basil, an uptight young British writer, who returns to the island of his ancestors to settle his inheritance, and Zorba, the exuberant Greek who becomes his guide. Despite their differences, the two are able to form a close bond.

Athens is believed to be the oldest European city. According to historical sources, it was inhabited as early as 3500 BC, but evidence of a human settlement dating back to 11000 BC has also been discovered.